You are here: Home › News › Community Collaboration. A Force To Be Reckoned With! 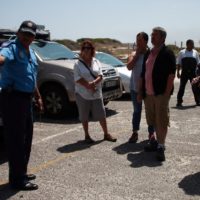 Every year, for the past 30 odd, has been a time when locals prepare for the surge of visitors, family and friends who see our amazing village by the sea as their prime holiday destination.

The swell of visitors becomes a tsunami wave of bodies when the season peaks on the two most frequented public holidays, Boxing Day and New Year’s Day. At this time of year we grit our teeth and brace ourselves behind our walls and security gates stocking up and locking up for those peak days.

But this year all that changed.

Years of foundation building from organisations, previous boards and teams culminated in a wave of volunteering, serving and activism over the festive season. From clean-ups to law enforcement support and Christmas lunches for homeless to neighbourhood patrols. The community came to the party.

Together with the City Solid Waste and Parks the Recreation Departments, MID has actively supported additional cleaning…

In the lead up to the season we focused on building a team of role-players in the community. The MID assisted in creating a forum of key role-players and interested organisations who could work together to facilitate a public health and safety environment for the festive season. A number of planning meetings and site inspections in the lead up to the season helped to build a comprehensive plan for the main visitor areas in Muizenberg incorporating the beaches and main picnic areas at the vlei.

Participants included Law Enforcement, Traffic, Metro Police, SAPS, Solid Waste, Parks and Recreation together with various other City and Governmental Agencies, community organisations and local security companies. We were privileged to have organisations from outside the Muizenberg community who came to assist us.

The plan was to involve all law enforcement agencies with the support of neighbourhood watches.

Stop and search of vehicles was to be the main plan of action and in order to do this law enforcement agencies needed to co-operate. A VOC (Venue of Operations Centre) was created at our local law enforcement offices under the command of Principal Inspector Ivor Ramsey and his team. All role-players provided staff to help co-ordinate the operations in the centre through radio and cellphone communications.

Expectations were running high as the operations started.

Neighbourhood watch teamed up with law enforcement officers which empowered or deputised them to help with the search for and confiscation of alcohol. Taxi drivers were fined for introducing alcohol to the area, passengers were fined for possession and large quantities of alcohol were confiscated.

A constant flow of bottles, bags and cases of confiscated liquor arrived at the VOC to be registered and locked in the strong-room. The flow became so much that an additional secure location had to be found for the overflow.

On New Year’s day alone 1019 units of alcohol were confiscated with a large part of this being spirits. Watch video below.

Hello Muizenberg was given access by Law Enforcement to view the alcohol confiscated on New Year’s Day. #hellomuizenberg

The intense zero tolerance enforcement had a major impact on numbers of people arriving and the consumption of liquor in the public space. The most exciting news we received from law enforcement in our debriefing meeting after the major holidays, was that our area was top in Cape Town for enforcement and confiscation of alcohol.  Drunkenness and rowdy behaviour was noticeably reduced by these actions.

The positive response from our community through social media and face to face interactions was overwhelming. Many people noted that they had never seen such a presence of law enforcement and their community support teams.

Visible policing made a huge impact on not only actual crime, but also the feeling of security by beachgoers.

Traffic police, metro police and law enforcement together with the reflective jackets of neighbourhood watches all contributed to a large visible presence of security. The efforts of City Social Development who provided arm tags for thousands of children created an awareness that resulted in a huge reduction of lost children over last year’s figures.

All lost children were united with their families which is a significant statistic.

As we reflected on the reports and feedback we realised that the incredible support from our community created an atmosphere of participation which in turn motivated law enforcement officers and associated agencies. Principal Inspector Ivor Ramsay and many of his team had never seen this kind of support from a community.

We salute the authorities who worked overtime to make a success of these operations and the community members who collaborated with and supported the initiative. Well done to everyone. We look forward to riding this wave of enthusiastic participation as we face future challenges in our community.

This, my reflection on an amazing Festive Season of community collaboration.