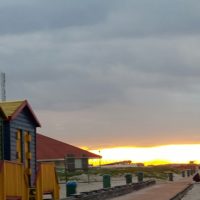 Tuesday 1 August saw much speculation on social media platforms amidst rumours that the Muizenberg beach huts are to be removed. MID rushed to verify this information with the City, and has received clarification on the matter as follows:

As part of the City restructuring, the management of all beach huts will move to the newly created Transport and Urban Development Authority (TDA) within the next few months.  The discussions around beach huts led to the concerns around a number of dilapidated huts on the eastern side of Muizenberg beach close to the river mouth. These huts are not located at Surfer’s Corner.

The dilapidated huts near the river mouth are underutilised and in a state of disrepair, for the following reasons:

Ward 64 Councillor, Aimee Kuhl, has called on the public and civic organisations to submit their written proposals to Aimee.kuhl@capetown.gov.za before 10 August 2017.

The Councillor has committted to gather all ideas submitted to her, and to review these ideas in concjunction with City Coastal Management for consideration.  See more in the below video.