You are here: Home › News › Our Relationship with Alcohol and Responsible Liquor Trading 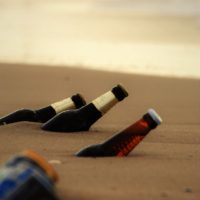 1019 units of alcohol confiscated around the Muizenberg beachfront area on New Year’s Day. Let that sink in, 1019 units! Some of units were confiscated from people leaving the shopping area, making their way to the beachfront. Some from passengers as they disembarked the train station, and then taxi drivers and passengers being fined as they unpacked their many bags containing alcohol as well as those arriving in their own transport, eager to unpack coolerbags.

This by-law enforcement, part of the successful public safety campaign during the festive season, drastically reduced the amount of alcohol that could have reached the beach, and increase the risk of intoxicated drivers’ behind the wheel . . .  Thereafter the challenge was monitoring and reducing the number of people eager to restock at nearby liquor stores.

At the festive season debriefing, what was and remains evident, is the role that retailers play in terms of Responsible Trading.  As a direct result, engagement with Checkers and Liquor City, lead by the Muizenberg Lakeside Ratepayers Association (MLRA), supported by organisations such as MID and Law Enforcement was initiated.

The subsequent agreement amongst all entities is to reduce trade hours for both retailers on the 2 April 2018, Easter Monday.

The rationale behind the request for reduced trade hours was to take cognisance of the day being a Family day.  In this way we strike a balance between business and community; continued collaboration.

Responsible trading calls for retailers to deny sale of alcohol to inebriated individuals, but also calls for trade times that consider the community and proximity of residential dwellings.  Simply put, the potential increase of profits for a business should not occur at the expense of a community.  MLRA and the MID have therefore objected to the Checkers application for extended liquor trading hours. Considering the needs of the community, including less fortunate individuals for whom alcohol is an addiction.

We recognize that wine in particular has been part of society since 8000BC with the first evidence of wine making dating back to present day Iran.  Whilst alcohol in moderation is considered to be an enjoyable accompaniment at meal times, socializing and celebrations in general, our relationship with it is not always a healthy one.

It is therefore imperative that we recognize the impact of an unhealthy relationship with alcohol, such as Foetal Alcohol Syndrome (FAS), addiction, and negative social behaviours.

Organisations like the Pebbles Project which focuses on disadvantaged children within farming communities, has excelled in addressing the dangers and subsequent harm that alcohol causes during pregnancy.  The “Dop” system which was first banned in the 1960’s and then again in 1995, was a system that “allowed” for workers to be paid in wine.  There is a direct link between this evil practice and Foetal Alcohol Syndrome or FAS. The Foundation of Alcohol-Related Research(FARR) found that at least three million people in South Africa are affected by FAS (source: FARR).

It would be very naïve to think that social issues and past practices, like the Dop System, have not contributed to present day challenges.  The challenge we all face is how to address and combat negative behavior associated with alcohol.

A very direct way is to reduce monetary handouts and replace it with food vouchers or supporting organisations such as MID, Living Grace and U-Turn who offer services to individuals struggling with addiction and homelessness.

Most vulnerable are street children who are often given hand-outs which can result in a need for urgent intervention when hand-outs provide a sustainable life on the streets – responsible outreach is key. If you are a local restaurant, then do consider partnering with StreetSmart whereby diners can add R5 to their bill, a fundraising tool for StreetSmart where funds generated gets disbursed to organisations working with and offering intervention to street children.

Looking out for our community starts with each and everyone within the community and we therefore call on you to positively engage with us and join us in finding solutions to our social issues. And if you or someone you know is struggling with addiction and need to find help, then dowload this resource document from the Western Cape Social Development Department or contact the MID social worker at socialwork@mid.org.za.

You can also listen to the Hello Muizenberg’s podcast where Wayne Turner speaks to Catherine Dillon and Dr. John Cartwright about this concern and solutions.